Americans are Living Longer and so are Our Residents! 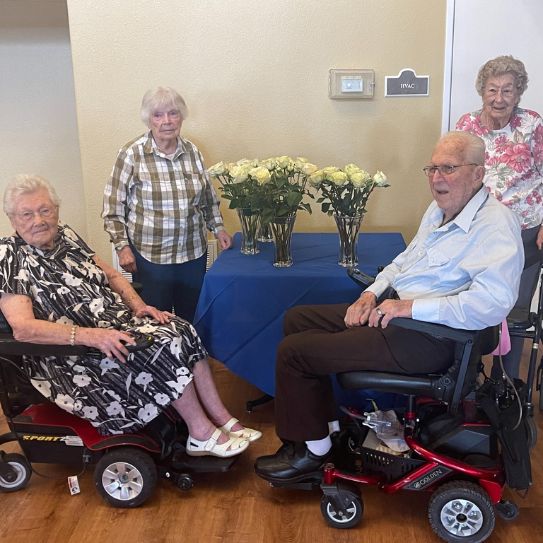 According to the census bureau, by 2060, total life expectancy in the United States is projected to reach an all-time high of 85.6 years. Despite a slight decrease in life expectancy due to the pandemic, lifestyle changes and the miracles of modern medicine and technology continue to increase the number of people living into their 90s and beyond every year. In fact, approximately 75,000 people in the United States are 100 years of age or older.

Evergreen Village is so lucky to have four of these amazing “centenarians” in our community. At 107, 101 (two of our residents), and 100 years young, they have lived a life chocked full of great stories, memories, and experiences. Studies have shown most seniors living past the age of 90 show similar traits. These include positivity, a strong work ethic, and close bonds with family, religion, and the countryside. They also live an active life, working on projects indoors as well as outdoors, all living a purposeful life. This is definitely the case here Evergreen Village. We believe all this is true of our residents, especially our 100+ seniors.

Just think of how resilient our residents surely are. Most have lived through or experienced World War I, Lindenberg’s first flight, the Wall Street Crash of 1929, the Pearl Harbor attack, World War II, D-Day, the Korean War, the Vietnam War, landing on the moon, Martin Luther King’s assassination, John F. Kennedy’s assassination, the launch of Amazon and Google, 9/11, our nation’s first black president, and, of course, Covid-19. Wow, think about that. A Time Magazine article on a study published on International Psychogeriatrics reported, “In order to flourish, they have to be able to accept and recover from the things they can’t change, but also fight for the things they can.”

You don’t have to be 100 to live at Evergreen Village in Prescott, Arizona. But if you are looking for the best assisted living and to be cared for by compassionate and tenured staff, you will want to make us your new home.